Although not presently in widespread use, blockchain has great potential to transform transaction processing across the economy – particularly for participants in the banking, financial services and retail sector.

The largest and most famous blockchain in use today is Bitcoin. But for many businesses a private or a public / private hybrid using blockchain promises to improve business operations. Blockchain is a transparent, electronic ledger in which transactions are recorded, mined and reviewed by participants. A blockchain shows that a transaction happened, when it happened and – upon consensus – that it happened correctly, without exposing confidential, identifiable details, including party identity and asset subject.

By storing transaction data in chronological order – or “chaining” it – rather than overwriting pre-existing iterations of a deal, it becomes far harder to change deal terms without the knowledge of all transaction participants. New proposed blocks are available for review by all parties. Only upon approval of the terms by a new party is a new block added to the chain, changing the original transaction. This reduces the likelihood of fraud within the network. 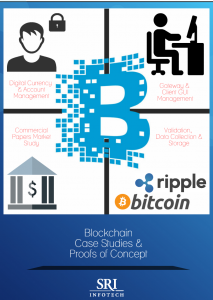 Blockchains, in order to work, must build trust between partners. Without that trust, participants are often unwilling to join, significantly diminishing the “power in numbers” benefits that make blockchain systems work. Moreover, immature and evolving technology standards, complications related to intra- and extra-enterprise connection and collaboration, ill-defined regulatory views of transaction legality and encryption and security concerns serve as significant barriers to rapid blockchain adoption.

However, when these and other challenges are overcome, all transactions within the blockchain network become transparent to all parties, making a central clearing house unnecessary. By exercising the power of the network for validation in lieu of central clearing house, blockchain stands to benefit participants in numerous ways, including increasing settlement speed, improving operational efficiency through increased digitalization, improving audit processes through review of stored blocks, reducing risk of fraud and reducing transaction costs. In short, blockchain has the potential to speed business, reduce costs and losses and improve efficiency.

As a result of perceived market advantages to its use, blockchain development and investment is moving rapidly. According to PricewaterhouseCoopers (PwC) 1.4 billion dollars were invested in blockchain startups during the first 9 months of 2016.

Because of perceived competitive advantages, including reduced costs, faster transaction settlement times and improved transactional accuracy, traditional banking and financial services institutions are particularly interested in blockchain. As a result, 90% of major banks in the United States, Canada and Europe are exploring blockchain technology, with 30% involved in developing proof-of-concept systems related to intra- and inter-bank transfers, corporate payments and person-to-person transfers.

At SRI, our research and development team aided one of our clients, a large global custodial services and investment management company who is also a member of the R3 Consortium, explore different blockchain applications in various business scenarios, including tracking and clearing financial transactions, shared ledger development and operation and smart contracts implementation. Moreover, all case studies were additionally tested to determine integration points with the client’s legacy application framework.

Particular attention was paid to developing and prototyping applications that provide permissioned immutable file storage using Bitcoin and torrent p2p protocol, as well as big data monitoring solutions using Cassandra, and which submit or extract corresponding transactions into and /or from Bitcoin or Ripple.

The Gateway is a set of web applications which utilize blockchain services and provide corporate end users with GUI access to different blockchain-specific operations. The particular focus of this project is to facilitate blockchain transactions for the end user while applying institutional rules, regulations and policies. Particular care was spent on isolating participants from technical complexity often associated with blockchain, such as crypto keys, wallets, mining and running nodes.

This prototype was built using Java, Cassandra, and JavaScript.

Proof Of Concept Studies in Ripple and Bitcoin

For Ripple, the proof of concept consisted of fulfilling two goals: building a Ripple validation node for participation in the network as a typical participant, and also collecting data from other nodes, for analytical analysis and market research.

For Bitcoin, the proof of concept consisted of developing a distributed storage applications which integrated proof of smart contract existence. This was accomplished through use of a bitcoin fork containing magnet links to files and file signature instead of transactions, enabling the verification of individual files upon discovery.

Blockchain has the revolutionary potential to modify the banking and financial services industry as we know it. While substantial barriers exist to adoption today, industry predictions call for widespread adoption of commercial and operational blockchain platforms by 66 percent of banks within four years.
As a result, now is the time for BFSI participants to experiment with the emerging technology, so as to perfect its application to existing and evolving products and service lines. Research, development and experimentation today will result in a more profitable tomorrow.

Want help exploring your blockchain options? Contact SRI Infotech today and learn more about how we can help you.